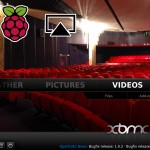 I have a NAS at home and wanted to be able to show my stored media on my TV. I looked at the different options and came to the conclusion (also based on the advise of a colleague) that the best for now would be a Raspberry PI.

First let me explain what a Raspberry PI is It is a mini computer that is developed for stimulating the teaching of basic computer science in schools. But just like the Arduino it can be used in a lot of ways. When you put a proper casing around the Raspberry it looks more like a real computer. It has the ability to output 1080p video and can work as an interface between your NAS and TV. This can be achieved by installing a XMBC OS on the SD Card that can be inserted into the PI. With a Composite video output and 3.5mm audio jack output or a HDMI output it can be attach to an TV.

What did I do to install

I installed the OpenElec version of XBMC on the SD Card ( followed these instructions: http://wiki.openelec.tv/index.php?title=Installing_OpenELEC_on_Raspberry_Pi ) and it ran immediately. when I plugged in the power, network and HDMI cables. The only thing that didn’t work directly where the mouse and keyboard I attached. After attaching another mouse and keyboard, it worked. Advise from my colleague was to install Synergy to use your keyboard and mouse from another computer. Maybe I will dot this later on.

So XBMC is an OpenSource media player. It allows users to play and view most videos, images and music from the internet, and all common digital media files from local and network storage media. See the video below for a introduction.

XBMC can be used to play/view all common multimedia formats. See here for all the formats like uPnP/DNLA and AirPlay/Airtunes.

Next to an keyboard or mouse you can also use an smartphone to use as a remote control. I downloaded the XMBCremote app from the App Store for this. You can also control some add-ons with this.

I was especially interested in showing videos from YouTube and Missed episodes from Dutch Television Broadcasters and indexing and playing my media files from my NAS.

I found out that the Dutch add-on Nederland24 and the Grooveshark add-on where not working any more (With all (opensource) software it’s important that people keep contributing to it so it will keep on working. I think these are not updated any more).

A nice feature that comes with the iOS systems and iTunes is AirPlay. You can stream content directly from your iPad or iPhone for example. This can be done with video from your local library and even images can be slided on your phone and slide on your xbmc. For video’s it works on al compatible video’s, also from within an app as from within the browser. See an Apple promotion video about AirPlay below.

An Raspberry PI with XBMC is also an affordable alternative for a system like Sonos (a music system where you can easily listen to music from your NAS and popular services like Spotify and operate it from special Sonos apps). Of course you are not getting the same UI and service (which for audio I think is really bad on XBMC). But that depends on what you want, need and are able to configure yourself on XBMC.

2 thoughts on “Raspberry PI and XMBC”

This site uses Akismet to reduce spam. Learn how your comment data is processed.